Shadows of the Shield

Behind every badge, there's a cop. Behind this cop, there's a film crew. 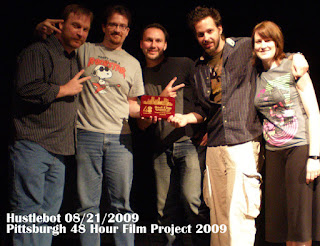 Hustlebot is very proud to have the winningest film in the Pittsburgh 48 Hour Film Project 2009, taking home the most awards for the film "Shadows of the Shield." Including:

Special thanks to the 48 Hour Film Project and the Pittsburgh's producers Kahmeela Adams and Nina Gibbs.


Written and Directed by Hustlebot
Filmed and Edited by David Fedor