Stoners with a Time Machine

Episode One: "The Time Pilot"
Mike, Jeff and Chris discover they have the power of time travel at their fingertips, so who better to ask for advice beside themselves... in the future!


Episode Two: "Stranger in a Strange Food Land"
Mike needs a new job, but will his choice lead to the end of the world?

Episode Three: "Wen Worlds Collide"
Mike's old lab partner shows up unannounced, so Jeff and Chris have to hide the time machine from too many questions.


Episode Four: "Do Androids Clean Like Electric Sweepers?"
Jeff uses time travel to bring a robot from the future to clean the apartment. But what surprise ramifications could come from Jeff's irresponsible laziness?


Episode Five: "Dr. Strange Stain, or: How I
Learned to Stop Worrying Where It Came From"
Determined to unravel the mystery of a mysterious stain on their carpet, the guys travel back in time to explore the history of their apartment to investigate the origin of the stain.


Episode Six: "Schrodinger's Pussy Galore"
Chris finally gets a cat, but when Future Chris can't comprehend the ramifications of his time travel, the apartment gets overrun with cats and jeopardizes Jeff's relationship with his future girlfriend.


Episode Seven: "Dark Side of the Wen"
Frustrated by his failure to build his own time machine, Mr. Wen attempts to "Divide & Convince" by turning each stoner against the other in a bid to capture Mike's original, working time machine.


Episode Eight: "Tube 2: Hypertube"
When the television is broken, Jeff does the only logical thing that makes sense... travel back in time to get the inventor of the TV to come and fix it. Then things get weird. GUEST STARRING: LARRY PHILLIS as JOHN LOGIE BAIRD!


Episode Nine: "Wen & Wen's Excellent Adventure"
Mr. Wen makes one last ditch effort to reason with Mike, Jeff and Chris hoping to recover the time machine. Will his reasoning and logic win them over, or will drastic measures need to be taken? 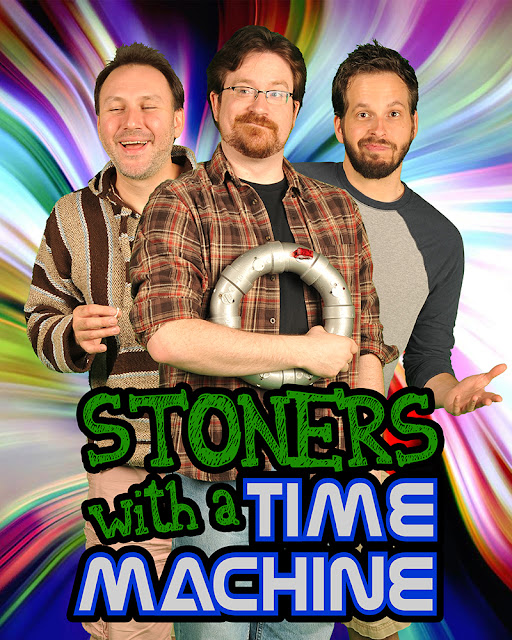 Stoners with a Time Machine is a comedy webseries that combines slackerdom and sci-fi while following three stoner roommates and their inefficient, often chaotic, use of time travel.

Written by Hustlebot in 2011, the original Stoners with a Time Machine pilot was a finalist in the 2012 New York Television Festival's Comedy Central Short Pilot Competition. The full webseries was then filmed and produced by Hustlebot in Pittsburgh, PA in 2014 and released (naturally) on 4/20/2016.

Theme Song Written by
Hustlebot and The Maxi Pads

No animals were harmed in the making of this webseries... although several actors were.
Extra Special Thanks to our Kickstarter Supporters.